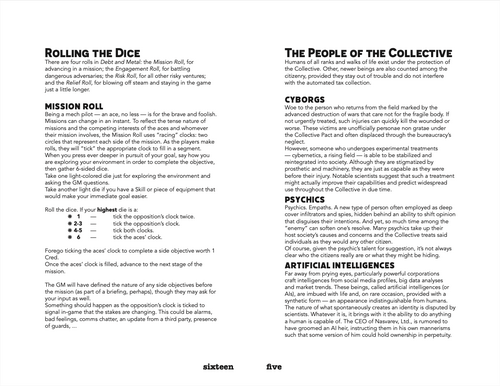 The Sortie Roll was bothering me, so I changed it. It was basically a copy of Trophy Gold's Hunt Roll, but, while that was fine, it wasn't great.

Debt and Metal's mission structure is a little more directed than Gold's incursions - yes, incursions have a goal, but generally the treasure-hunters are exploring. In Debt and Metal, there is, like, a clearly defined objective and probably a mission briefing, so I've reworked it. The Sortie Roll is now the Mission Roll and the Roll uses racing (and potentially linked) clocks: Both the aces and opposition have goals in the mission and the clocks model that the aces' actions have consequences a little better given the context.

That's all! I'll put out the Field Manual (aka bestiary) soon - it'll be a printable booklet like the zine, but much simpler and something you can expand as you need given just how simple the format is.

Debt and Metal (US Letter) 2 MB

Get Debt and Metal