As Hilts, you are obligated to wield the Blades by talent, ability or otherwise. Do you believe in the mission? Will you tire of being used? Is something else going on..?

Play to find out!

HILT // BLADE is a roleplaying game Powered by the Apocalypse that is, in essence, a love letter to mecha anime. It explores the emotional and psychological terrain of those pilots of giant robots—in this game, Hilts wielding their Blades. HILT // BLADE is inspired by anime like Neon Genesis Evangelion, DARLING in the FRANXX and the Gundam series.

Play occurs in two stages, one focusing on the interpersonal, “normal” lives of the Hilts and the other on the action-packed fight sequences during which the Hilts try to take down an Imminent Threat—an existential enemy threatening to destroy civilization as the Hilts know it. All of this is mediated by a special character named the Custodian, who works with a paramilitary organization to manage the squad of Hilts in order to eliminate these Imminent Threats. This special character can be roleplayed by a MC or collaboratively by all of the players.

In order to download this game you must purchase it at or above the minimum price of $10 USD. You will get access to the following files:

Support this game at or above a special price point to receive something exclusive.

These community copies are offered free of charge to anyone facing financial hardship. For every paid copy purchased, a community copy will be made available for free.

Hello. Just want to say I love the idea of this game, but don't feel like I have the right to put out a proper review without fully trying out its game-play mechanics. Want to work something out where I can play-test it and put some ideas out there?? I have an email if you'd like to talk about this idea more.

No, the game is available for purchase. It was playtested extensively through 2019, so no more playtesting is needed. If purchasing is an obstacle, keep an eye out for a community copy to become available after a new purchase is made (by anyone).

Hi, just wanted to make you aware that the Custodian playbook seems to be missing from the single page PDF.

Read through my copy last night and there's some great stuff in there. I have a couple of questions, if that's OK?

- am I right in understanding that there's no mechanic for the Blades taking quantitative harm, and that aside from unchecking the Imminent Threat clock it's all just handled narratively? I'm assuming this is to focus Delimiting (which I love!).

- there aren't any MC Moves, aside from the Custodian ones. I see the note about acting like an MC would in any other PBTA game, so it just a case of using those kind of standard Moves?

- When a move calls the the MC to "shift your Levels", is that a case of the MC adjusting them in a way that makes sense in the context? And can include shifting all three?

Thanks! I'm looking forward to trying this game out.

Hey! Thanks for your questions. I’ll answer in order:

- You are correct that there is no quantitative harm mechanic and it should be handled narratively. You got it exactly that operations and fights with Imminent Threats are stressors to focus on Hilts, their relationships and those getting pushed to the edge (and delimiting). I’m working on a supplement right now, though, that will add a damage mechanic to make operations a bit crunchier—look out for that if it’s something you’re interested in!

- You for sure can look to other games for guidance with MCing. I basically had Monsterhearts 2 open the whole time I was writing. I’m working on a widescreen layout and plan to expand on a lot of the text (the primary version is the zine, so it’s necessarily limited), so there’ll be more MC/less guidance coming soon(ish).

- Yes, shifting Levels should make sense in context, but the Levels are quite broad and, in a way, arbitrary. They could also be adjusted sort of in reaction to: “Oh, this approach went bad for you, so we’re going to push in the other direction;” “Actually? I’m going to reinforce this because you’re pissed off, right? Maybe you need to be more reactionary!” Neither MCs nor players can shift more than two Levels and they have to be in the opposite direction. Shifting Levels means raising one and lowering another by one each, i.e. if the MC shifts their Levels, they could add 1 to any one Level and they would have to subtract 1 from one of the other two Levels.

Hope that helps! Feel free to ask more questions as you think of them.

Gotcha. That all makes perfect sense to me. Thank you for taking the time to reply!

I got to play an early version of this and it amazingly captured the tone and feel of, i.e. the pain and elation of the adolescent protagonists from Mecha anime. 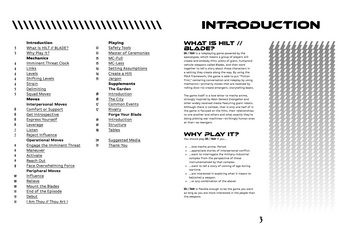